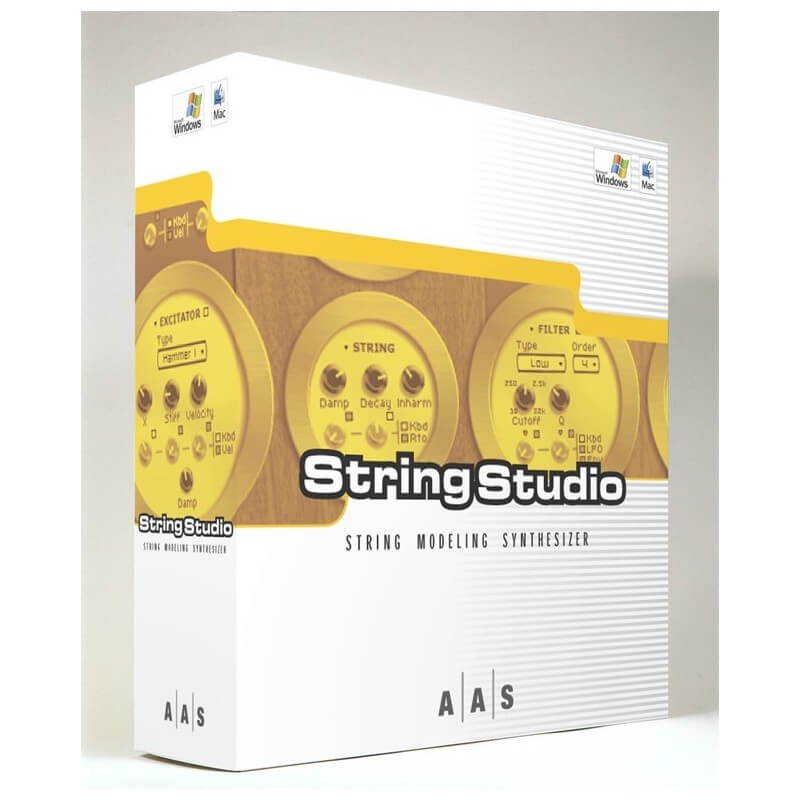 String Studio AAS VS 1 - A New Breed Of Synthesizer. With its picks, bows, hammers, fingers, frets, dampers and soundboards, String Studio is the perfect blend of advanced modeling and regular synth-control features

Retail Box - With Hybrid CD Mac/PC and paper manual US 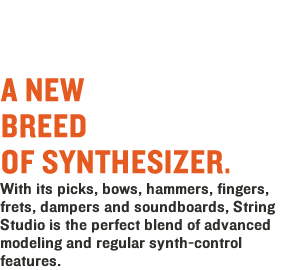 The string is the thing

String Studio VS-1 is a string modeling synthesizer plug-in that swaps the traditional oscillator, filter, and envelope pattern for real-life string instrument components. String Studio's pick, bow, hammer, finger, fret, damper, and soundboard let you control the materials, natural decay, grain, warmth, buzzes, harmonics, resonance, friction, tension, and component interaction that make up the sound of guitars, basses, clavinets, clavichords, pianos, and ethnic instruments. And that, with the same scope and versatily that you've come to expect from a full-featured traditional synthesizer.

Sound designers are in for a treat. String Studio VS-1 packs pads that blend the characteristic attack and decay with the organic and natural movement of acoustic instruments; growling, twisting, and evolving ambiences that carry a mixed bag of emotions that will move any film score; and playable sound effects that react to each note and velocity to produce an infinite realm of possibilities.

We're usually quick to recognize foreign instrument by their distinctive attacks, strange resonances, and unusual behaviors. String Studio has loads of these rare and unheard ethnic instruments—a wonderful journey through time and space, and surely a touch of exoticism to your productions.

The benefits of physical modeling

Take it for a spin

There is nothing like a test drive before you buy. Less than 10 MB to download. Seconds to install.

Select your soundcard port from the list in the Audio Configuration dialog from the Audio » Audio Settings... menu.

Select/highlight your MIDI port from the list in the MIDI Configuration dialog from the MIDI » MIDI Settings... menu.

Double-click on the String Studio VS-1 Demo icon located in the Applications folder.

The String Studio plug-in integrates seamlessly into the industry most popular multi-track recording and sequencing environments both as a virtual instrument plug-in. String Studio works as any other plug-in in these environments so we recommend that you refer to your host sequencer documentation in case you have problem running String Studio as a plug-in.

Manuel String Studio VS1 US

8 other products in the category

String Studio AAS VS 1 - A New Breed Of Synthesizer. With its picks, bows, hammers, fingers, frets, dampers and soundboards, String Studio is the perfect blend of advanced modeling and regular synth-control features

Retail Box - With Hybrid CD Mac/PC and paper manual US